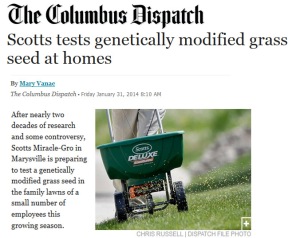 announced at its shareholder meeting this past week that they would be having employees testing genetically modified grass seed in their yards.

Is that legal? Yes.  Because it’s been approved as environmentally safe?  Nope; because it falls through the cracks of a rattletrap regulatory system.

When GM (genetically modified) plants arrived, most countries drafted legislation for dealing with the new technology.  The US didn’t, choosing instead to cobble together a system using old agencies and laws, awkwardly dividing oversight among 3 separate agencies depending on what genes were used.  The FDA (Food & Drug Admin) is responsible for GM plants if they are food.  The EPA (Env Protection Agency) is in charge if the plant contains a pesticide like a Bt gene.  The USDA (US Dept. of Agriculture) oversees GM crops made with plant pests — like Agrobacterium (a bacterium that causes a plant disease, used to insert the genes into the target) or the 35S promoter (from a plant virus).

I wrote a blog on this in Fall 2011, connecting two disturbing dots: the complete evasion of regulatory oversight and the use of gene patents that are used to prevent scientists from even studying GM organisms. (Since I wrote that, an interesting analysis of such regulatory loopholes  appeared in the Vermont Law Review.)

But shouldn’t this GM grass undergo regulatory scrutiny? That’s a touchy question.  Many people are deeply troubled by our slow-pitch regulatory framework, while at the same time a favorite talking point among GMO boosters  is the overabundance of regulation.  But why don’t we just consider Scott’s own past ecological misadventures with GM grass: 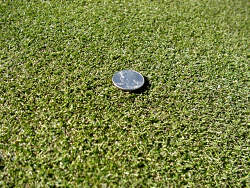 , Scotts planted 162 ha. of Roundup-Ready (glyphosate-tolerant) bentgrass in their seed production facility in central Oregon.  Bentgrass, Agrostis stolonifera, is the stuff on golf greens, but away from the golf course it’s often a weed.  Pollen from the GM grass got into the Oregon wind and crossed with Agrostis plants up to 21 km away (as reported in the Proceedings of the National Academy of Sciences).

After being fined by the USDA (the maximum possible, $500,000), Scotts scrambled to eradicate all the feral glyphosate-resistant plants in the area, trying to enlist help from local landowners via newspaper ads.  They failed; ecologists found that even 3 years after the seed production was stopped, 62% of bentgrass plants tested in the area were transgenic.

Then in 2012, the plot thickened: in a study in Molecular Ecology entitled “Crossing the divide”, ecologists Zapiola and Mallory-Smith reported that feral GM bentgrass was hybridizing with plants from a different genus, rabbitfoot grass (Polypogon monspeliensis).  This is a big deal, notes ecologist Alison Snow: it’s the first transgenic intergeneric hybrid, it represents a new herbicide-tolerant weed, and it raises questions about the efficacy of the procedures for preventing unintended gene flow of GM plants.

(The Oregon bentgrass joins a long list of transgene escapes.)

The GM grass that Scotts employees are going to be testing in their yards is different than the bentgrass; it’s Kentucky bluegrass (Poa pratensis) and the hope is that it will be easier to contain because its pollen is heavier.

Let’s hope, because there is no control over it.