Why We Eat So Much Meat: Beef, Bombs, and Convenience

Why we eat so much meat is a question that keeps coming up, as well it should.  The real reason is that…. well to cut to the chase, there are a lot of reasons, big and small, general and specific.  I just read a small but interesting one this morning from dieter-blogger Jane McClaren (responding to Mark Bittman’s “Hooked on Meat“):  it’s because of agricultural distancing.  When stores have tasteless long-traveled vegetables, “Why not go next door and grab a salty, fatty burger in a bag? It’s so much easier.”  I’m not sure how much that really explains, but I’ll grant that the convenience factor is in the top 10 drivers of meat consumption, at least in those parts of the world blessed with McD’s and Ponderosas.

But the main reason we have such convenient beef outlets in the first place is that we had artificially cheap beef, because we had artificially cheap grain.  It all started with the flood of nitrogen in the US following WW2.  Most nitrogen in nature needs to be “fixed” before plants can use it, but some concentrated forms of fixed nitrogen are both fertilizing and explosive.  Timothy McVeigh, you may remember, blew up the Murrah building with a truckload of fertilizer.

The Germans invented industrial nitrogen fixation in the early 1900s for fertilizer, but they ended up making bombs in WW1.  Americans built nitrogen fixing factories in the early 1940s for bombs, but ended up making fertilizer after the war.  Lots of it: way more fertilizer than farmers could use, so we started breeding grains with a sweet tooth.  (And Japan, one of the main reasons we had built the bomb factories in the first place, kindly “donated” some important fertilizer-intensive crop varieties — including a type of wheat that later became the basis of the “Green Revolution,” but that’s another story.)

The watershed was 1950.  Look what happens to inorganic fertilizer use: 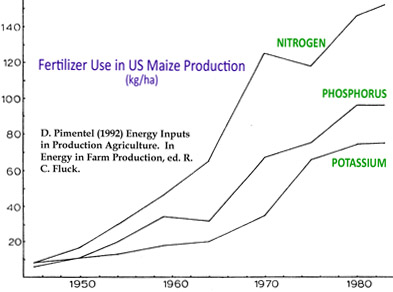 The fertilizer age was driven by nitrogen, but use of industrial nitrogen meant the farmer minimally needed phosphorus and potassium as well. A lot has been written on the "NPK" mentality; I think Michael Pollan does a particularly good job with it in Omnivore's Dilemma.

In the field, farmers could now plant corn plants much closer together to capitalize on the highly concentrated fertilizer.  But all those extra roots required extra water,  and the moist fertile soil and dense plants were a heaven for weeds and insects.  So, a short history of agricultural industrialization in the US: tractors in the 1920s, hybrid seeds in the 1930-40s, and then after 1950 the trifecta of intensive fertilizer, irrigation, and pesticides.

An Illinois corn field. My colleague, the renowned ethnobotanist Gayle Fritz, point to where the plants are literally planted right on top of each other.

And it came to pass that corn yields (output per acre) boomed.  And that corn prices slumped.  Here’s a graph I just made; again look at what happens after 1950.

Click to see the graph. Data are from the USDA's National Agricultural Statistics Service.

The change in grain (especially corn) ecology led to the splitting of crop and livestock production and laid the foundation for factory farming, highlighted by the hyperproduction of maize and maize-feeding cows (and other animals) in CAFO’s.

Of course cows are ridiculously inefficient at turning grain into meat.  The “feeding efficiencies” of stock animals change through time, but in 1975 when US beef consumption was at its peak, it was taking 14 kg. of corn to make 1 kg of beef.  For comparison, the ratio for pork was 6:1, and for chickens 3:1.  But that wasn’t a problem, it was an opportunity; after all, the system was in effect looking for ways to burn up the surplus corn.

Americans had eaten beef before, but the beef boom began in the 1950s — a story that has been told elsewhere.  The underlying cause was a surplus of fertilizer being turned into a surplus of grain being turned into a surplus of beef.  So when we hear that the worlds needs to boost food production by so much, not just because of population growth but because people in developing countries want to eat more meat, it’s a bit convoluted.  We eat this much beef, and have these institutions to provide it so conveniently, because we overproduce grain.

Notes.  If you’re interested in “distancing” and “fresh” foods, you owe it to yourself  to read Suzanne Freidberg’s wonderful book Fresh.  On meat eating as “progress” throughout history I recommend Warren Belasco’s Meals to Come: A history of the future of food.  A fascinating article on the politics and ecology of splitting up crop and livestock production is Foster & Magdoff’s “Liebig, Marx, and the depletion of soil fertility: relevance for today’s agriculture” in Hungry for Profit. The figures on feeding efficiencies are from Smil (2002) “Eating meat: Evolution, patterns, and consequences,” Population and Development Review 28:599-639.

2 Responses to Why We Eat So Much Meat: Beef, Bombs, and Convenience