The NY Times recently published “Engineering Food for All,” a gushing op-ed by professional GMO proponent Nina Fedoroff that bemoaned the increasingly burdensome regulatory oversight of GM crops.  She went so far as to link world hunger to regulation of GMO’s.

I thought of her piece as I read 2 short pieces in the latest Nature Biotechnology.  Actually both of them concern news from last month, but the journal happened to print them side by side, and together they tell us something troubling about the regulation of GMO’s.  I find it troubling anyway, and I’m usually pretty unimpressed with chicken-little warnings from both sides of the GMO wars.

First let us remember how revolutionary it is to be able to move genes among organisms.  This technology is in its infancy but even its first baby steps include bacteria that produce medicines and food ingredients, and crops that resist herbicides and make insecticides.  Scientists are working on crops to improve nutrition and detoxify soil and animals to grow transplantable organs, to mention just a few feats.  It’s hard to even guess what may genetic engineers might do in the future.  (Someone on my campus recently suggested that we could even engineer animals so they didn’t mind being tortured in factory farms.  Hey, could we could engineer poor people so they didn’t mind being poor?)

How to manage the risks inherent in genetic engineering is one of the most pressing and difficult issues the world faces today.

The US and the European Union have approached the problem differently.  While the EU drafted new laws to deal with GMO’s, the US jerry-rigged a regulatory system using old  agencies and laws.  Regulators really only ask 2 questions about any GMO: how risky is it to public health and to the environment?  But depending on which gene has been inserted and what the plant is for, the responsibility for oversight may belong to the USDA (Dept of Agriculture), FDA (Food & Drug Admin) or EPA (Env Protection Agency).  This is called the Coordinated Framework.  It’s coordinated alright, but it’s also Byzantine, inefficient, and slow to adjust.  Almost everyone involved with biotech agrees that the US regulatory system sucks.

But does that mean that we just need “less regulation” as Fedoroff and some others claim?  Well, consider this: in the US you can create and release a GM plant into nature with no regulatory approval at all, and then prevent anyone else from studying its effects on health or the environment.  That’s what these 2 articles are about, so here’s a short explanation of both. 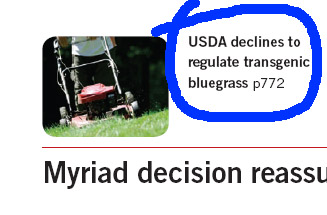 1. GM grass eludes outmoded USDA oversight.  People realized long ago that a GM plant could be made to fall right between the cracks in the Coordinated Framework.  The FDA checks plants if they are food.  The EPA checks plants if they contain a pesticide like a Bt gene.  The USDA checks plants made with plant pests — like Agrobacterium (a bacterium that causes a plant disease, used to insert the genes into the target) or the 35S promoter (from a plant virus).

Which is exactly what Scotts Miracle-Gro did this summer with herbicide-tolerant GM bluegrass, and the USDA confirmed that it is outside their regulatory authority.  Since there is no basis for the EPA or FDA to evaluate it, it is the first example of a zero-regulation GM plant.  But is it just a fluke?  Hardly: Scotts is “blaz[ing] a regulatory trail” that will be followed by other companies, who are “salivating over this” notes a prominent biotechnologist.

No other country has allowed, or even considered allowing, completely unregulated GMO’s to be released into nature.  In fact, no court or legislative body in this country decided to do this either.  It’s just the result of a deeply flawed regulatory system.  Sure, it’s overly slow in approving some well-known technologies, but it’s overly fast for others, and sometimes even non-existent.

But won’t science tell us if this GM bluegrass poses health or environmental problems?   That’s the chilling part.  Consider the article on patents.

2. Myriad patents upheld. An appellate court has overturned a ruling invalidating Myriad’s breast cancer gene patents — and  essentially all gene patents.  It’s a fascinating argument covered in an earlier blog.  The issue turns on whether or not judges think that isolated DNA is truly different from natural DNA.  If it’s judged to be the same (using criteria that are not really spelled out in law) then it is a “product of nature” and no one can make claims on it.  But if it’s different, then it is eligible for intellectual property protection.  But what kind?  Answer: a utility patent, the 600 pound gorilla of IP protections.  Intended for actual inventions, a utility patent lets the owner stop anyone from making, using or selling the invention for a 20 year period.  Even for research.

The “research exemption” issue has been duked out in the courts (dumb pun intended) especially in the Embrex case and in Madey v. Duke.  The only uses exempted from patent rights are narrow and slightly silly: if a company owns a patent on a gene or plant, they can stop any use except for “acts of amusement, idle curiosity, or strictly philosophical inquiry.”  A patent holder can absolutely keep you from doing any research with their gene or plant.

And they do. Sometimes patent holders stop research right in the middle of a study.  Ecologist Allison Snow was forced to stop her research on ecological impacts of Bt sunflowers; entomologist Ken Ostlie was forced to stop his research on rootworms because one company decided the study was “not in its best interest.”  But more commonly, patent holders don’t even let the research start. In 2009, 26 leading scientists submitted an anonymous statement to the government saying that they were being blocked from doing necessary research by patent-holding companies.  (They remained anonymous for fear of patent holders spanking them by preventing more of their research in the future.)

Fedoroff writes that regulation of GM crops “has become so costly and burdensome that it is choking off innovation.” This misleading claim surely has many people thinking that regulation is getting tighter and tighter.  But in the US today you can create and release a genetically modified crop that has not been evaluated for health and environmental safety, and then you can block anyone from studying its safety.

So when Fedoroff concludes that “above all, the government needs to stop regulating genetic modifications for which there is no scientifically credible evidence of harm,” I can only wonder: how would anyone be able to get any evidence of harm for this genetically modified grass?

This entry was posted in Agriculture, Biotechnology, Intellectual Property. Bookmark the permalink.