Since I do research on small farms for a living, I don’t normally find it a cause for celebration to be wrong about small farms.  But I am toasting Caromont Farm’s kickstarter success and my complete wrongness. 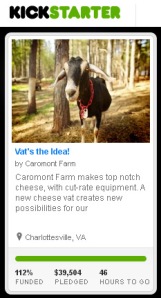 I described the Caromont kickstarter project in a previous post.  I pointed out that there is much more at stake here than the fortunes of a small farmer & goat cheese maker in rural Virginia.  It’s really about adjusting notions of philanthropy and profit vs. non-profit institutions.  It’s about how we can deploy our consumer dollars to achieve more than just a mouthful of good food.

The problem is that what Caromont needs is a $35,000 vat and they were asking for the whole thing.  I told the the proprietor, Gail Hobbs-Page, that I would make a donation but that she was asking for way too much.  I mean, $35,000 in donations?  (Well, OK, these are not pure donations — you do get something tangible in return.  For my $50 I get a cheese board, and the $1000 donors get a multi-course dinner at her farm.  But for all of us, the main gratification was in supporting the farm and what it’s part of.)

Now it’s time to step back and put this into perspective.  Two perspectives actually, one heartening and one troubling.

First the heartening one.  Kickstarter reports that in 2011, when it turned 2 years old, it collected just shy of $100 million in donations.  There were 27,086 projects launched, 46% of which were successfully funded.  Of that, $2.8 million was pledged by 30,682 backers for food projects.  They don’t separate out nonindustrial or “alternative” food/farming projects, but if you peruse the project listings you quickly see that most fall into this category.  Considering how new kickstarter is, and how few people have even heard of it yet, this is really something.

So U.S. consumers are not only spending close to $5 billion a year on local food, for which they often pay a premium and go out of their way more than a trip to the supermarket, they are starting to dish up a surprising amount of philanthropy to support alternative food production.

But the dark cloud behind this silver lining is that we are increasingly buying in to a  system with two separate circuits for reckoning, creating, and paying for value in food. Local/alternative farmers are not subsidized and they don’t make a mess.  Industrial producers claim to be more “efficient,” but what they are actually efficient at is garnering subsidies and evading the consequences of the messes they create in the air, water, soil, and public health.

While consumers were paying full value for unsubsidized local food and even topping off that outlay with several million dollars in food philanthropy, an ocean of pelf was flowing every day from agribusiness into political coffers to maintain government subsidies and protections from responsibility for their messes.

Today’s example: generous donations from German pesticide producer Bayer to both political parties, but mainly the Republicans — $261,000.  Bayer Crop Science produces the most common neonicotinoid insecticide which is increasingly looking like a key culprit in bee colony collapse disorder.  (Make profits selling sprays to farmers but don’t pick up any of the tab when your sprays help kill off the bees.  Now that’s efficient!)

I gave $50 and I get to be part of happy mob of 261 fans of artisinal cheese and small farms.  Plus I get a cheese board.  Let us watch and see what Bayer gets.