Bt Cotton in Africa: What Happened in Burkina Faso?

As stories about GM crops in developing countries unfold, I continue to be struck by how very different each case is.  Despite the desire for simple global narratives of success or failure, the crops differ, the transgenic traits differ, the problems to be solved differ, the cultures differ, and the issues differ. Science can publish papers on Bt cotton test plots in India with titles like “Yield effects of genetically modified crops in developing countries”, but those test plots don’t actually tell you anything about “genetically modified crops in developing countries,” they just tell you about Bt cotton test plots in India.  As I have written elsewhere, Indian cotton is a unique situation [1] – very different from Bt cotton in South Africa [2], GM eggplant in India [3], Golden Rice in the Philippines [4], banana in Uganda [5], and so on.

For many years there has been publicity

about Bt cotton growers in Burkina Faso, much of it listing the outstanding benefits across the board.  But a few months ago, suddenly the news was “Burkina Faso phasing out GMO cotton, citing poor quality.”   Cotton companies are even suing Monsanto.

I’m an outside observer here – my research on African agriculture was in Nigeria and it was before GM crops came along.  But I know some scholars who follow these events closely.  Brian Dowd-Uribe (International Studies, Univ San Francisco. ) and Matthew Schnurr (International Development Studies, Dalhousie Univ) have written extensively on GM crops in subSaharan Africa and have already published a short piece  on the implications of what’s happening in Burkina. Now they have agreed to provide this guest blog which provides the interesting backstory of what is happening.  Once again, it is a very particular story: it has to do with colonial-era breeding, quality of lint (the fibers that are separated from seeds, from which thread is made), and the particular way they grow cotton in Burkina.

Thanks to Brian and Matthew.

Burkina Faso’s Bt cotton reversal: Why Africa’s largest producer of GM cotton is phasing out production and what this means for GM crops in Africa.

Brian Dowd-Uribe and Matthew A. Schnurr*

In 2003 Burkina Faso, in partnership with Monsanto, began development of Bt cotton. At the urging of Burkinabè cotton sector officials, Monsanto agreed to backcross the Bt gene onto local varietals, which were then released to farmers in 2008.

At first, the introduction was hailed as a

success with farmers enthusiastically adopting the technology.  But despite the many published claims of agronomic and economic success for these farmers, if you look at the actual  empirical inquiry into the Burkina Faso situation you find trouble.  The main evidence of Bt cotton outcomes in Burkina Faso comes from a group of Monsanto-funded studies conducted by one research team. Their early studies from 2009 showed that Bt cotton produced yield gains of 18.2 %, which boosted profits despite higher Bt seed cost. However these studies did not report how those yield advantages were calculated. Later studies drawing from the same household surveys reported that an average Bt cotton farming family gaining 50% more profit than from conventional cotton.  Glenn Stone found that the authors of these studies calculated the yield differences by comparing Bt cotton with refugia planted with conventional cotton. Comparing with refugia is problematic, since farmers devote little attention to them; the purpose of refugia is to grow caterpillars that aren’t resistant to Bt. Moreover, farmers do not harvest refugia separately from the rest of the field, so it is a mystery where the numbers for conventional yields came from.

Nonetheless, most farmers were enthusiastic about Bt cotton primarily as a tool to save valuable labor time. Bt cotton requires significantly less pesticides reducing labor needs at critical moments in the growing season. By 2014, more than 140,000 smallholder farmers were cultivating Bt cotton, representing 70% of total cotton production in one of Africa’s largest cotton producing nations.

But recently the success story of Bt cotton’s adoption came to an abrupt end. In 2016, Burkinabè cotton officials claimed that the Bt cotton varietals produced lint of inferior quality resulting in tens of millions of dollars in lost revenues. The Bt cotton lint fetched lower prices on the global market and undermined the global reputation of high quality Burkinabè lint.

Since then, the Burkinabè cotton sector has moved swiftly to reduce Bt cotton sowings. For the current 2016/2017 growing season approximately 10% of total production is from Bt cotton. A complete phase out is planned for next season.

What went wrong with what was supposed to be an example of the potential benefits of GM crops for resource-poor farmers in Africa?

The first part of the explanation concerns lint quality. High lint quality is Burkina Faso’s competitive advantage on the global cotton market. Most cotton in the world is machine picked, which ends up producing shorter fibers of lower quality. Handpicking, which is practiced throughout Africa, keeps the fibers in tact, allowing them to retain their length and sturdiness, setting most African cottons apart from global competitors like the USA and Australia.

Both cotton fiber quality and cotton fiber efficiency (a measure of the amount of lint that can be extracted from each pound of cotton) are products of a decades-long breeding program that began during the French colonial era. Because of this breeding program, Francophone African cotton fibers have earned a reputation for high quality and efficiency. — by the mid-2000s Burkina Faso achieved some of the highest cotton efficiency ratings in the world. It is because of these high quality and efficiency characteristics that Burkinabè officials asked for the Bt gene to be backcrossed into their renowned local cotton varietals.

Unfortunately the quality characteristics of the original Burkinabè varietals were not retained when crossed with the Bt gene. Internal fixes were attempted but didn’t succeed in reversing this problem. In 2016, Burkinabè cotton companies pulled the plug on the entire program after incurring significant economic losses.

But the lower lint quality did not directly hurt cotton farmers. They continued to reap improved yields and incomes with lower labor requirements. Rather, the losses were shouldered entirely by the cotton companies. Why then would cotton farmers, who apparently like the technology and want to continue to cultivate it, stop growing Bt cotton? The answer is that they don’t have a choice.

Unlike other GM crop producing nations, cottonseed is entirely controlled by cotton companies in Burkina Faso. This means that farmers can only grow those seeds that are provided to them by the cotton company. Seeds are not saved in Burkina Faso because farmers are paid by weight, and extracting the seeds would reduce that weight

Under pressure to liberalize its cotton sector in the 1990s, Burkina Faso split its territory into three exclusive zones for three cotton companies, avoiding the rapid and comprehensive privatizations of the cotton sectors of its Anglophone African neighbors. In each of the three exclusive zones, one cotton company provides seed and inputs on credit to farmers at the beginning of the growing season, and then buys back the cotton at a fixed price at the end of the season. These vertically integrated systems, a product of the French colonial era, have been hailed as a major driver of agricultural productivity in large parts of Francophone Africa. Today the largest cotton company, SOFITEX, which is primarily state-owned, controls over 80% of Burkina Faso’s total cotton production. 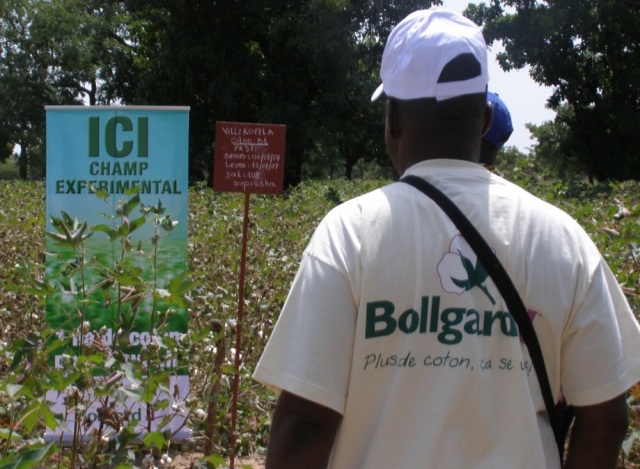 Burkina Faso’s reversal and the implications for Africa

So what does this reversal mean for the future of transgenics in Burkina Faso and Africa more generally? In the short term transgenic cotton will no longer be an option for Burkinabè farmers since cotton companies will continue to control seed supply. It does not appear, however, that this reversal has reduced Burkina Faso’s interest in GM crops more generally or in GM cotton specifically. Burkina Faso continues to do research on transgenic varieties of cowpea. Cotton sector officials have also indicated their willingness to continue to research transgenic varietals so long as they retain desired quality characteristics, and have recently reached out to Bayer CropScience as a potential partner in developing such varietals. Nonetheless any re-introduction of transgenic cotton in Burkina Faso is likely to receive far more scrutiny, potentially delaying introductions.

One outcome of Burkina Faso’s reversal is the tarnishing of the image of GM crops as precise and universally beneficial. GM crop breeding, like other forms of breeding, can still result in unintended consequences that must be carefully analyzed and mitigated. In this case the introduction of transgenics transformed Burkina Faso’s cotton breeding program in two significant ways. It shifted the focus of breeding efforts from producing varietals that exhibited a diversity of quality and local adaptation characteristics, to a more narrow focus on pest resistance. Although pest resistance is a welcomed trait, neither cotton companies nor farmers are likely to consider it the most desired trait for breeding efforts. It also shifted breeding efforts from being exclusively public in nature to a more privately driven endeavor. The private nature of transgenic research resulted in varietals that were rushed to market. Instead of spending the money and time to ensure that desired quality characteristics were maintained, Monsanto and their cotton company partners released the Bt cotton varietals to farmers. This dynamic of desiring a quick return on investment is likely to accompany other GM crop introductions in Africa.

The lint quality controversy exposes the different interests for Burkinabè farmers and cotton companies. The reversal on Bt cotton shows the continued power of the state-run cotton company, something the World Bank has long attempted to curtail. It also opens a rift between the cotton companies and the very types of more mechanized and ‘professional’ farmers they have spent decades grooming who desire to continue growing Bt cotton. It is unclear how this apparent rift will be resolved. Larger, former Bt cotton farmers are likely to continue growing conventional cotton. However, according to interviews with farmers, they are likely to reduce the size of their plantations given the additional labor demands of conventional cotton. This may result in reduced cotton production in Burkina Faso, not simply due to the lower overall yields of conventional varietals, but also due to reduced sowings.

GM crop advocates would like to minimize Burkina Faso’s reversal on Bt cotton as simply a one-off problem that isn’t likely to reproduce itself elsewhere. Nonetheless, the Burkina Faso reversal may give pause to other large cotton producing African nations – countries like Mali, Cote d’Ivoire, Cameroon, Benin, Zambia and Zimbabwe – where high quality cotton is a significant market advantage. However, Nigeria’s recent approval of Bt cotton may signal that African countries are still willing to go ahead with this technology despite problems in Burkina Faso. It remains to be seen how this controversy will affect adoption of GM cotton in other nations slated to adopt this technology in the coming years such as Uganda, Ghana and Kenya.

*Brian Dowd-Uribe is Assistant Professor in the International Studies Department at the University of San Francisco. His current research explores the social, agro-ecological and economic dimensions of food, agriculture and water policy in sub-Saharan Africa and Central America. Dr. Dowd-Uribe’s primary geographic area of expertise is Burkina Faso, where he has conducted field-based research on questions of agricultural development since 2005.

Matthew A.  Schnurr is Associate Professor in the Department of International Development Studies at Dalhousie University in Halifax, Nova Scotia, Canada.  His current research investigates the potential for GM crops to improve yields and livelihoods for smallholder farmers across Africa.  He has undertaken field-based research in Uganda, Kenya, South Africa, Burkina Faso and Ghana.

12 Responses to Bt Cotton in Africa: What Happened in Burkina Faso?