Of all the GMO controversies around the world, the saga of Bt cotton in India continues to be one of the most interesting and important. In the latest chapter, reported by the Business Standard, cotton yields have dropped to a 5-year low, setting off a fascinating round of finger pointing.

Data from the India Ministry of Textiles.

India approved Bt cotton in 2002 and within a few years yields were up dramatically. There are different sets of data out there, but let’s use the India Ministry of Textiles data since it’s this weeks news story. This chart shows the national trends in cotton yield (kg per hectare).

If you follow GMO debates you will have heard several years of kennel barking about how these figures show a “remarkable success.” But as I have pointed out (in my blog and in EPW), most of the rise in productivity had nothing to do with Bt cotton; in fact it happened before Bt cotton became popular.

So Bt didn’t explain the big rise in yields, and since Bt has taken over, yields have been steadily worsening. What are we to make of this? Well, two things, according to the Business Standard and the Monsanto spokesperson who was their main informant. One has to do with what has gone wrong, the other with what we need to get out of this mess.

1. What Went Wrong? (the farmers screwed up?)

It seems the bollworms — the voracious pests that that Bt cotton is designed to kill — are developing resistance. But resistance, according to Monsanto, is “natural and expected.”

Whoa — that’s not what the farmers were told to expect. I was there when Bt cotton was being rolled out and they were told repeatedly and confidently that they wouldn’t have to spray any more. In fact we were all being told that “genetic farming is the easiest way to cultivate crops. All that farmers have to do is to plant the seeds and water them regularly. The genetically modified seeds are insect resistant, so there is no need to use huge amounts of pesticides.”

All the farmer has to do is plant and water the seeds… and then wait around for resistance, which is natural and expected. But wait there’s more: when it does appear, it’s the Indian farmers’ fault. Monsanto’s spokesman explains:

Among the factors that may have contributed to pink bollworm resistance to the Cry1Ac protein in Gujarat are limited refuge planting and early use of unapproved Bt cotton seed, planted prior to GEAC approval of Cry1Ac cotton, which may have had lower Bt protein expression levels, he added.

A “refuge” is a strip of non-Bt seeds farmers are asked to plant around their Bt fields, basically to raise bollworms that aren’t resistant to Bt, so they can hopefully breed with any resistant bollworms.[1] Very few Indian farmers actually do this, because it’s a lot of extra work for no return. Here’s an insight from 30 years of research on farming: if you’re pushing a technology that is only sustainable if farmers follow practices that require extra work for no return, you are pushing an unsustainable technology.

The other Monsanto suggestion is that the farmers are to blame for planting unapproved seeds. Sorry, that dog don’t hunt. Those unapproved seeds were Navbharat-151 and they have been much written about; they were better than the approved seeds, and their Bt levels were apparently sky high. Gujarat, where they were planted, has had India’s biggest rises in yields.

But while we’re blaming Indian farmers, why stop there? Monsanto also explains that

farmers have been constantly educated to adopt measures such as need-based application of insecticide sprays during the crop season and adoption of cultural practices like keeping the field clean of cotton stubble and crop-leftovers, ploughing of land after harvest so that the resting stages of the insects in the soil could be destroyed.

I have yet to bump into the educators who are giving farmers constant remediation on spraying, plowing, and field clearing. But I do bump into a lot of biotechnology people who pontificate on the wisdom of the Indian farmer. The farmer has long been seen as backward, tradition-bound, and inept. “We need to teach proper tillage,” a Monsanto executive explained to me years ago. But farmers are obstinate, and in fact this was one of the arguments for GM seeds: 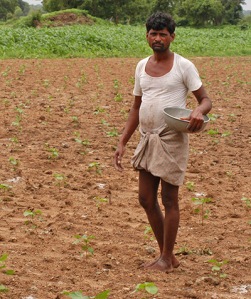 for years people have tried to change cultural practices of these farmers, and it just hasn’t worked. It has been a complete failure, because you have to modify infrastructure, you have to re-educate them as to how to modify their farming practices themselves. But with biotech, the technology is in a seed. All you have to do is give them the seed. (-biotechnologist Martina McGloughlin)

But as soon as Indian farmers adopted GM seeds, we were told that “we should leave the choice of selecting modern agricultural technologies to the wisdom of Indian farmers” and that “farmers are excellent businessmen who aren’t persuaded by anything or anybody that doesn’t make their job easier or more profitable.” [2]

So don’t question the wisdom of the farmer! He is a genius — at least when he is buying GM seeds. Otherwise, he is a clueless slack-jawed clod who can’t plant, spray, or plow without remedial instruction.

So despite all the GM seeds, India’s cotton yields keep on dropping. (In some states, they are now lower than they were before Bt seeds became popular.) So what’s the way forward?

To me this is a very hard question, but not to the Business Standard, which simply reports the news that

continuous R&D and innovation to develop new value-added technologies is imperative to stay ahead of insect resistance. To support such innovation, Monsanto demanded government policies’ support to encourage investment in R&D which will result in Indian farmers having a wider choice of better and advanced technologies translating thereby, higher yield.

No kidding — innovation from Monsanto is going to keep us ahead of the insects and guarantee higher yields. But lets take a look at the facts, at least as reported by the industry-friendly ISAAA. Yields started dropping after 2007/8. But that was just after new genetic constructs started appearing: a new 2-gene technology in 2006/7, and by 2009, six different constructs were approved. And these rapidly proliferating technologies were appearing in dizzying numbers of seed products. After 2006/7, the number of Bt hybrid seeds being offered to farmers jumped from 62 to 131 to 274; by 2009/10 there were 522.

There you have it: Indian cotton farmers today are being pelted with a hailstorm of new gene technologies and seed products, their yields steadily dropping, and the way forward is clear to the Business Standard: invest in Monsanto innovation.

53 Responses to Bt Cotton is Failing; Blame the Farmers