Do small farmers in developing countries want GM crops?  That is a truly divisive question, and it seems like anyone with a dog in the hunt gets to speak for the farmers.  I want to consider what’s wrong with the many claims to represent the “farmer’s voice.”

But first, a word about the idea of just using farmer adoption as indicative of what they want.  In India, land of a hundred million farmers, we are told by GM enthusiasts that the country’s only GM crop — Bt cotton — has been the “fastest adopted agricultural technology in history.”  The implication is that Bt cotton must be the most wanted technology (e.g., Herring 2008).

And we are just as regularly told to never second guess the farmer.  As one Monsanto-backed pundit puts it,  “farmers are excellent businessmen who aren’t persuaded by anything or anybody that doesn’t make their job easier or more profitable” (Fumento 2003:277).

Therefore, according to another industry cheerleader, “We should leave the choice of selecting modern agricultural technologies to the wisdom of Indian farmers” (Pinstrup-Anderson & Schioler 2001:108).

But it’s interesting that the same biotechnology interests that now marvel at farmer wisdom and astuteness in dealing with agricultural technologies until recently saw the farmer as an incorrigible slack-jawed nitwit.  Here is Monsanto a few years before Bt cotton was adopted:

Weeds, for instance, are responsible for 30- 60% of the damage to our agriculture yields. But there is very little awareness of this among Indian farmers, while those who are aware, lack knowledge of the appropriate solutions (Monsanto India 2000)

Did you get that?  They not only didn’t know how to get rid of weeds, they didn’t know weeds were lowering their yields.

You don’t have to teach these farmers new culture practices…you just give them a seed, and that increases productivity in that seed itself… for years people have tried to change cultural practices of these farmers, and it just hasn’t worked… you have to re-educate them as to how to modify their farming practices themselves. But with biotech, the technology is in a seed. All you have to do is give them the seed (McGlouthlin 2001).

(Give them the seed? I love it.)  So if I’m picking up what they’re putting down, the farmer’s desires are something to be tut-tutted and hopefully corrected… unless he is buying your technology, in which case he is a rocket surgeon, not to be questioned.

Actually technology adoption is much more complicated than farmers simply wanting or not wanting something (for instance, see our recent work on herd dynamics in seed choice).  But still there is a lively trade in constructing claims about what farmers hanker for.  The claims are in peer-reviewed journals, in the media, and in reports and propaganda from pro- and anti-GMO parties.  Like so much in the world of GMO’s, they disagree sharply.  In fact most are somewhere between meaningless and misleading.  If you’re interested in why these claims are generally so flawed, part of our answer appears in “The Problem with the Farmer’s Voice,” an article just published in the journal Agriculture and Human Values.  You can read it here if you want; it’s pretty short.  But then again so is life so let me just give you a summary.

Claims to represent the “farmer’s voice” generally have two built-in biases.  (The recent article also covers a third bias which I’m leaving out for brevity’s sake.)

First is information bias.   If farmers have never seen or used a technology, then their opinion is basically a result of how you characterize it to them. The people doing the interviews know this, and they’re hoping you don’t think about it.

For instance, in 2001, with possible approval of India’s first GM crop looming, a consortium of anti-GM groups convened a ‘‘citizens jury’’ in Andhra Pradesh.  Aiming to give voice to ‘‘those people most affected’’ by visions of agricultural development, organizers selected a jury with heavy representation of poor farmers (although they are rarely early adopters of technology) and showed videos they themselves had made depicting three visions of the agricultural future.

And guess what: the farmer jurors largely agreed with a statement expressing opposition to GM crops, including vitamin A rice and Bt cotton (Pimbert and Wakeford 2002). A similar farmers jury in Mali in 2006, as that country was considering Bt cotton, had a similar result (Bryant 2007), generating headlines in London ‘‘Mali farmers reject GM crops as attack on their way of life’’ (Selva 2006).

On the other end of the spectrum we have a study by the biotech-booster outfit ISAAA.  They constructed a voice for Philippino ‘‘farmer leaders’’ on Golden Rice by asking if they wanted to grow “a new ‘yellow rice’ that is fortified with vitamin A and that will be given free by the IRRI” to most farmers.  (Actually Golden Rice doesn’t contain vitamin A but a precursor, and IRRI itself has said that it hasn’t yet been established that Golden Rice raises vitamin A levels.)   But readers will be unsurprised that when it was put this way, most respondents answered this characterization of Golden Rice in the affirmative (Chong 2003).

I’m reminded of how Steve Jobs scoffed at focus group testing of the ipad, on the grounds that consumers couldn’t judge a new product with which they were unfamiliar.  But imagine for a minute that there was a focus group and you were running it.  How do you describe the device to the focus group?  An in-between device that’s too big for your pocket but not nearly as powerful as a notebook?  Consumers will say they don’t want it.  A device that has many of the most useful features of both notebooks and smartphones, that fits into a purse or small briefcase but lets you watch movies? They’ll demand it.

The second problem with “farmers’ voice” claims is short term bias.  Adoption of agricultural technologies often leads to unforeseeable latent effects.  They may be indirect, they may be much delayed, and they are sometimes disastrous.  Most farmers voice claims are oddly oblivious to this fact, focusing instead on the present moment.

Here’s an example.  A few years ago, as concern was rising about the spread of Roundup-resistant weeds, science journalist Dan Charles rang up Monsanto to ask why they didn’t know this would happen.  They said they “had just spent more than a decade, and many millions of dollars, trying to create the Roundup-resistant plants that they desperately wanted — soybeans and cotton and corn.” 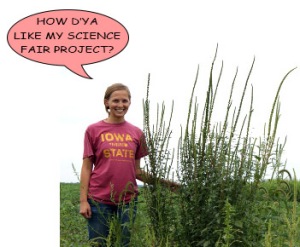 This Palmer Amaranth’s parent is bursting with pride.

I’m trying to imagine the farmers voicing this desperate want.  “Oh please, give us a seed-herbicide combo that will make weed management easier at first but within a few years will leave us with herbicide-resistant weeds so big we have to use a chainsaw.

India is another example of how the impacts of technology can change dramatically after they are adopted by farmers.  We’ve already noted that widespread adoption of Bt cotton (mainly between 2005-8).  This was interpreted as the clear sound of the farmers voice, sounding like the most resounding yes since the last page of Ulysses. Then for icing on the cake was a swarm of studies claiming to have isolated significant yield advantages in the first year or two or even before adoption, validating the dogma of never questioning farmer wisdom.  (A summary of these studies is here, including mentions of the rare exceptions to the obsession with short-term results.)

Bt cotton enthusiasts may see this as an open and shut case of giving the farmers what they want but it’s also a case of fetishizing of short-term yield boosts and ignoring the bigger picture and longer term. Here’s why: the whole reason the farmers said yes to Bt cotton in the 2000s was the catastrophic agroecological fallout from their yes to the last round of farm technologies. Pesticide-intensive proprietary hybrid cotton seeds spread in the 1990s (details here).  But quick profits (due mostly to favorable markets and initial effectiveness of pesticides) rapidly gave way to pesticide treadmills, spiraling input costs, debt and despair. It was this package that formed the technological component of the tragic problem of farmer suicide

The hybrid seeds would also have problematic long-term effects. They led to farmers being inundated with hundreds of often deceptively labeled brands which helped to undermine the skilling process (details here).

What farmers said yes to was what was before their eyes, not to what lay down the road. All of this fell outside of the decision-making window of farmers and of the analysis window of researchers. If you ask a farmer whether he would buy a certain technology, or if you assume that a purchase is a straightforward indicator of farmer desire, then you will convince yourself that the farmer’s voice is calling out for that technology.  But in this case, a better question to ask would have been if the farmers wanted a seed/pesticide technological regime that would lead them into an unsustainable, suicidal, agro-entomological hell.¹

1.  Does all this mean there is no value in any research on farmer wants regarding GM crops?  No, in fact there is a study in the same issue of Agriculture and Human Values that tackles the topic more thoughtfully.  Even its title –“No one asks for a meal they’ve never eaten, or do African farmers want genetically modified crops?” — recognizes the limitations of such studies.   This study by Schnurr and Mujabi-Mujuzi draws on some other work by Cleveland, Soleri and others that approaches the question in a more fruitful way; see references below.

This entry was posted in Agriculture, Biotechnology, India. Bookmark the permalink.