CRISPR and the Monsanto Problem (GMO, be some other name!)

‘Tis but thy name that is my enemy;
Thou art thyself, though not a GMO.
What’s GMO? it is nor hand, nor foot,
Nor arm, nor face, nor any other part
Belonging to a man. O, be some other name!

If gene editing isn’t on your radar yet, it will be. Tools for gene editing (genome editing) have been around for over a decade, but the new one – “CRISPR-Cas9” — is so much more quick, cheap and powerful that it is sending shock waves throughout the scientific community.  It was the “scientific breakthrough of the year” according to Science, and in recent months it has been featured in mainstream media like the New Yorker, NY Times magazine, Salon.com, and in a TED Talk by CRISPR pioneer Jennifer Doudna.

Gene editing, especially with CRISPR, is much more precise and controllable than the comparatively clunky process that have been used to make GMO’s (genetically modified organisms), and it obviously has enormous potential.

We are already seeing headlines (sounding a lot like corporate press releases) promising that gene editing could banish hunger, cure disease, even make self-fertilizing crops —  if only the public keeps its busybody luddite nose out of it and leaves biotech companies free to alter whatever DNA they feel needs altering.

Whether that happens will depend partly on what controversies arise over the next few years.  With GMO’s the first controversies were confined to the scientific community and they were mainly concerned with the possibility of diseases.  Then a series of hot button issues emerged in the late 1990s after GM crops appeared in the market, including:

All these issues have impacted public opinion and we are still bickering over them.

We don’t know what direction the gene-editing debates will take.[2]  But one crucial battle is already being quietly waged over a question that grows directly out of the GMO battles: do we call gene-edited organisms GMO’s?  This is key not just for the obvious reason that we need some agreement on terms in order to talk with each other; more importantly, it will shape how the public reacts to the new technology.

Whether gene editing is genetic modification obviously depends on how you define your terms, and the terms for this stuff have an interesting history.  In 1958, just 5 years after the discovery of the structure of DNA, Nobel laureate Edward Tatum predicted “processes which we might call biological engineering.” 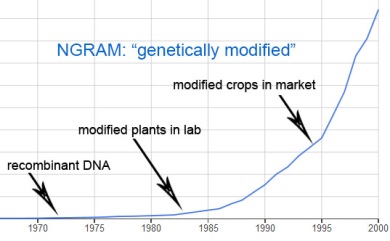 When this came along in the early 1970s, it was called “genetic engineering” or “recombinant DNA,” although these terms were mainly used in scientific circles.  Public awareness of the technology rose in the mid-1990s when it appeared in crops and foods; “genetically modified” then came into common use and  “recombinant DNA” declined.

Here’s a short explanation of the science.  Of the technologies involved in genetic engineering, nothing is as important as a group of enzymes called nucleases.  Nucleases exist mainly because a war has been raging between viruses and bacteria for billions of years, and bacteria long ago developed these enzymes to chop up viral DNA.[3]   Biotechnologists learned to manipulate these “molecular scissors” to chop DNA so it could be reassembled and inserted it into target organisms.

Jennifer Doudna’s figure of DNA sliced by Cas9 and given a piece of donor DNA.  See her Ted talk from 2.55-6.35 for more.

But most nucleases are hard-wired to chop DNA only at specific sequences.  Genome editing uses soft-wired  (programmable) nucleases to cut virtually any DNA in any organism at any specific spot.  (The beauty of CRISPR-Cas9 is that it is easy to program.)  Biotechnologists can then manipulate DNA’s natural repair mechanisms, for instance by adding “donor DNA” that will be patched into the DNA molecule as it self-repairs.

So do you call them by the same name or not?

I said it all depends on how you define your terms, which in turn depends on what you are up to.  And it looks like a priority of gene editors is, to quote New Yorker’s Michael Specter, to “Avoid the Monsanto Problem”.

Just exactly what is the Monsanto problem?  To Specter, it is GMO’s having “failed to engage people,” so people became suspicious and even hostile even “after the technology has been proven both safe and useful.”

An alternative view is that GMO’s have engaged people, but people failed to find them useful. After all, the most common GM crop in the world by far is the Roundup-Ready soybean, which yields a little less and takes a lot more Roundup. And safe? Many of us believed that at least Roundup was safer than many other herbicides, until the FAO concluded that it was likely carcinogenic all along.

But whatever caused the problem, it is a problem, and gene editors understandably want to put as much distance as they can between their new technology and GMO’s.  Which is precisely why a campaign is on over a name.

Examples abound.  Here is a scientist at Cibus Corp (which already has a gene-edited crop on the market) on his company’s own (non-CRISPR) type of gene editing:

And we read in Genetic Engineering and Biotechnology News that

The older forms of transgenic genetic modification carry the status of …GMO, a politically controversial label that has hobbled the commercial development of agbio markets…

In contrast, gene editing enables stable and heritable genomic changes quickly and easily without introducing foreign DNA…[whereas] gene editing will enable researchers to modify genetic information in a natural way to bring out of the existing genome entirely new traits. And best of all, regulators have given it the green light to position its products as the non-GMO alternative.

This European Biotech site answers their own question with a resounding NO on the grounds that edited crops lack a transgene.  Why this should be illustrated by a head of broccoli and a bike is opaque to your humble narrator.

(Technically true but it does often have synthesized donor DNA.  But anyway…) let’s continue to the Technology Review where we read that “The appeal is that it offers control over genes without modifying a plant’s genome—that is, without creating a GMO.”

And the European Biotech website answers its own question “Crops Successfully Edited with CRISPR have no Transgenes! Is this Still GMO?” with a resounding NO because gene-edited crops lack transgenes.[4]

Got it?  Gene editing is not genetic modification because it doesn’t introduce foreign DNA.  OK actually it does, but not as much.  And that’s what makes all the difference.  In fact, unlike GMO’s with the transgenes, this is a natural way to introduce traits. Gene edited crops are not GMO’s. Any questions?

I have one. Haven’t biotechnologists been insisting for years that all our food plants are GMO’s?  In fact, that any organism affected by humans is genetically engineered?  That it makes no difference if foreign DNA is involved or not?

I Thought Everything was a GMO, Even with No Foreign DNA

You must have run across the meme that “all our food is genetically modified.”  Biotechnologists seized on this repackaging of the term to counter GMO opponents who were gaining traction with FrankenFood imagery. It has become nearly ubiquitous.

This rather contrived repackaging of the term pushed its way into the pages of Science in a commentary by biotech booster Nina Fedoroff entitled “Prehistoric GM Corn.”

Fedoroff was commenting on research on corn domestication that had nothing to do with genetic modification or with her, GMO-splaining that natural mutations were “genetic modifications” and that ancient Mexicans selectively replanting seeds were doing “genetic engineering.”  No foreign DNA or bacterial nucleases were involved and in fact no DNA had been altered — domestication doesn’t alter DNA, just frequencies of naturally occurring genes.  But her point was that if there are any human-induced changes, even just in gene frequencies, then you’ve got yourself a GMO.

If you follow GMO media you see the claim almost every day.  From Fedoroff again and again. From Peter Raven.  In National Geographic.  In the New York Times.  In AgBioWorld. In Business Insider.  In plant science courses.  Journalists have been persuaded that this is a story: “Sorry hipsters, organic kale is genetically modified” explains a Smithsonian headline, taunting a purely imaginary bloc of bearded morons.

genetically modified, why not claim that we are too, since we’re eating it? This is exactly what the GMO Journal tweeted today.

Got it? All our food, our own bodies, indeed almost everything in life is genetically modified.

Everything, that is, except for gene-edited organisms, whose DNA has been cleaved by engineered nucleases and has incorporated donated DNA to alter gene function.  That’s just natural.  Don’t call them GMO’s or they will not smell as sweet.

[1]. That’s how this controversy was widely understood anyway, although it’s inaccurate.  This famous sterile-seed technology was developed by the USDA and patented with the cotton seed company Delta Pine & Land.  It caught the attention of activists when Monsanto started to buy Delta in 1998, which is when it acquired the nickname “Terminator.”  While the 1998 deal was blocked, Monsanto did later buy Delta although they never commercialized the technology.

[2] Well, we know there will be controversy over the issue of editing human germlines (i.e. making heritable changes).  Chinese scientists have already done this, albeit with non-viable embryos. In her TED talk, Doudna shows a baby edited to prevent disease but also to be a sprinter with perfect pitch and a head of hair. Her only note of caution is that we should “use it wisely” (that’s helpful!). Biologist Robert Pollack points out that “rational eugenics is still eugenics.”

[3] This is obviously a simple explanation omitting much detail.  For instance, these nucleases occur not only in bacteria but in prokaryotes in general, including archaea.

[4]  Does the US government think gene editing is genetic modification? It’s mum on the question; it doesn’t actually regulate GMO’s as GMO’s, instead regulating GM crops as plant pests if they are made with Agrobacterium and regulating then as pesticides if they contain Bt genes. (If they contain neither, they are totally unregulated even if they are genetically modified.)  But countries with GMO-specific regulations are starting to weigh in on the side of NOT calling gene editing a GMO technology.

This entry was posted in Agriculture, Biotechnology, CRISPR. Bookmark the permalink.

17 Responses to CRISPR and the Monsanto Problem (GMO, be some other name!)